Riverview Gabriel Richard made the very short trip over to Southgate Anderson on Thursday night for an early-season tilt on the pitch in boys’ soccer. The visiting Pioneers picked up a 4-0 win over the host Titans, improving to 2-0 on the young season.

The first 20 minutes of the game was scoreless as both Richard (2-0) and Anderson (0-1-1) put together some pressure and scoring opportunities, more so the former. The Pioneers eventually broke through in the 21st minute on a goal from Ashton Novak. Then it was Asher Cousino with the first of his two goals on the evening about 10 minutes later to give Richard a 2-0 edge going into halftime.
In the second half, it took less than seven minutes for Richard to pot a pair of goals in a span of about two minutes. First, it was Emilio Gaglio upping the Pioneers’ lead to 3-0 before Cousino finished off his two-goal performance and the scoring for the day.

Both teams in this one got to dip into their bench and move some players around in various positions on the field. It was more opportunistic for Richard. For Anderson, however, it became more of a necessity due to injuries.

“Today we had an opportunity to look at some players that maybe don’t get as much playing time,” Richard coach Eric Perilla said after the game. “Just good to move guys around and get them into different positions.”

“I told some of these guys that you’re going to have to learn to play through being hurt,” Andesron coach Larry Lankford said. “That is not something I can isolate on one or two players. But when you’re down eight or so guys, half of which are starters, and you have a lot young players, it can hurt. That is why you kind of saw us fall apart there.”

“You have to give (Richard) credit,” Lankford added. “I think we played a lot better than most people would have figured coming in. They’re always well-coached and stay organized. We have a long way to go but I am encouraged (through two games) thus far. I think we’re showing progress and being competitive.”

Perilla called it “exciting” to get off to the start they have thus far and believes it is hugely beneficial to be able to be flexible with the roster early on.

“Today was just big for us to look at some extra personnel,” Perilla said. “As the season goes on and guys get injured or banged up, we’ll have a good idea then of who we can call on to fill in certain roles.”

For Richard, it was the second win over a Downriver League team this week, as the Pioneers knocked off Allen Park 3-2 on Monday. Richard be back in action on Tuesday, Aug. 27 in Catholic League play at Detroit Cristo Rey.

Anderson opened its season with a 2-2 tie in a battle with Allen Park Cabrini on Tuesday.

The Titans were set to play again on Saturday, Aug. 24 at the Wyandotte Invitational. They will get the DRL season started with a home game against Trenton on Aug. 26. 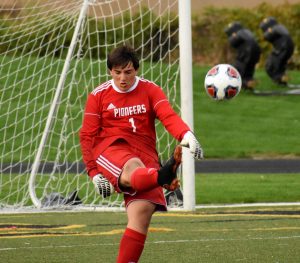