Despite the sweep, Cabrini (2-5, 0-1 CHSL AA) was competitive in all three sets.

Helping to lead Richard to victory was Bella Kandes, who finished with 22 digs, six kills and two assists. Also for the Pioneers, Catie Schultz came away with seven kills, six assists and a pair of blocks.

This fall, Richard is looking to follow up a big 2018 season that included a 32-8-3 record, a trip to the CHSL championship game and a News-Herald Invite championship.

In the first set on Wednesday, the Pioneers jumped out to a 5-0 lead and were up 9-3 following a Francesca Vitale kill and an ace from Jenna Demarco. Vitale wrapped up the night with six kills and four digs and Demarco finished with six kills, three blocks and a pair of aces.

Later in the set, Cabrini’s Bridget Villarreal had back-to-back aces and tied the score at 19-19. Soon after, Schantz had two aces in a row and gave the visitors a 23-20 advantage.

The Pioneers, however, responded by taking six of the next seven points. With the late run, the hosts claimed a 26-24 victory and led the match 1-0.

To start the second set, Richard’s Madelyn Szczechowski delivered two aces in a row. Overall, she contributed a total of five aces, 20 assists and five digs on Wednesday evening.

An ace from the Monarchs’ McKenna Goers evened up the score at 7-7.

Richard took a 15-11 lead, following a Kandes ace, but Cabrini responded with six unanswered points and went up 17-15. The six-point Monarch run included an ace from Abigail Formella and a block by Lindsey Gutt.

For the Pioneers, ace from Olivia Coleman tied things up at 18-18. Cabrini claimed the next point and went back on top. However, Richard dominated down the stretch and won the second set by a score of 25-20. 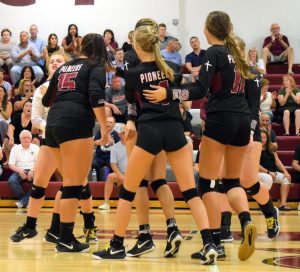 Demarco kicked off the third set with a kill for the Pioneers and it helped guide her team to a big early lead.

Despite dealing with a deficit, in both the set and match, the Monarchs continued to play strong and eventually pulled to within two points, at 17-15, following a Villarreal kill.

Richard’s Chloe Pace had two aces in a row and it gave the home team a commanding 23-15 advantage. For the night, Pace had five aces, five digs and 10 assists.

With Cabrini trailing 24-17, Schantz stepped to the serving line one more time and she delivered three consecutive aces. The fourth attempt led to the Pioneers’ 25th and final point, which capped off their 3-0 match sweep.

Richard and Cabrini are both scheduled to play in the Wyandotte Invitational on Saturday at Roosevelt. To continue league play, Richard will welcome in Waterford Our Lady of the Lakes on Wednesday, Sept. 11 and the Monarchs will host Madison Heights Bishop Foley the next night.