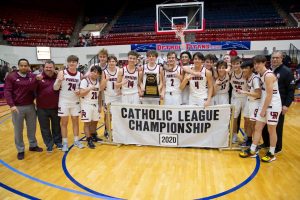 It’s been a long wait for Riverview Gabriel Richard.

The Pioneers won the C-D division CHSL tournament championship in their third game this season against Cardinal Mooney — all wins. It’s tough to win three consecutive games against one team.

“No question. What do you do to adjust? They got to adjust two times against us. We don’t adjust, we just try and stick with our system, try to stick with what our kids do defensively, our kids buy into that pretty well,’’ Richard coach Kris Daiek said. “They believe in that, but we can’t adjust anything, we won two games so it’s tough.’’

It was a huge win for Richard which now owns an 18-1 record.

The Pioneers led throughout, but the Cardinals were never out of it.

At the end of third Richard led 45-29, but the game was just getting interesting. Cardinal Mooney kept chipping away at the lead and got within 4 points (55-51) with a minute and a half left. When No. 4 dropped a 3-pointer with less than a minute left, Mooney again with within 4 points (58-54). But Gabriel Richard held on for the win.

“Did they miss a shot? We switched everything defensively, I thought we did a good job, (Nolan Julio)  knocked down some 22- and 24-footers, our defense is designed to kind of do that, to make teams beat us from the perimeter, he almost did it,’’ Daiek said.

Calhoun and Nick Szczechowski, both sophomores, started for the Pioneers.

“They’re very young, very talented kids, hard-nosed kids,’’ Daiek said.”They knew they had a chance to start over the summer, busted their butts and got themselves ready, they’re playing pretty well.’’