Ashley Henderson was named to the News Herald Team. The senior forward’s prolific prep career came to an end this season with another productive spring effort (21 goals, four assists). Henderson, who reached a milestone during the winter basketball season after crossing the 1,000-point mark for her career, surpassed another this spring by exceeding 100

Jackie Reitmeyer, Gabriel Richard: The sophomore pitcher started 17 games for the Pioneers and took home all-region honors. When not in the circle, she played third base and finished the season with a .932 fielding percentage. At the plate, she had 32 hits and wrapped up 2013 with a .381 batting average.

Casey Lyons, Gabriel Richard: Lyons was the lone Pioneer to travel to the MHSAA state meet this season and came back with an 18th place finish in the 400 with a time of 62.22. To qualify for the meet, she placed second at regionals. Lyons was also second place in the 400 at the CHSL

This years Burgundy and White will be highlighted by a short football scrimmage. “We are planning on having a small football scrimmage to help kickoff the football season.” Athletic Director Kris Daiek said. “I think this is a great opportunity for everyone to get a sneak peak of this years team. This day was traditionally

DISTRICT BASEBALL: Cabrini blanks Richard in district championship By Chris Zadorozny Photo by Larry Caruso. It was a pitcher’s duel in the championship game of baseball districts between Cabrini and Gabriel Richard Saturday afternoon, but the score might tell you different. Between Pioneer freshman Jacob Lipetzky and Monarch senior Erik Hicks, the duo only 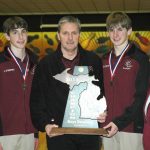