On August 20th Gabriel Richard Catholic will have the annual Burgundy and White Day. Burgundy and White Day is a “Kick-Off” to the Fall Sports Season. The day starts with a fall sports mass followed by team and individual photos. Parents and fans will also have a chance to purchase family passes, team apparel, 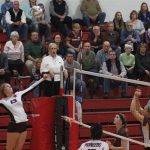 Gabriel Richard Catholic would like to announce the 2017 Fall Sports Try-out Information. Please note that every student must have a current (After April 15th, 2017)physical and must be uploaded to PRIVIT (ONLINE LINK: grpioneers-mi.e-ppe.com). Please fill out a profile on the PRIVIT web site. Any changes to schedules will be on our Dynacal Calendar 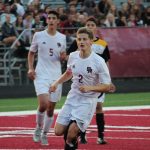 The 120 finalists for the Michigan High School Athletic Association’s Scholar-Athlete Awards for the 2016-17 school year, presented by Farm Bureau Insurance, have been announced. Senior, Nick Hammond has been named a Finalist. The senior, played Cross Country, Soccer and Track and earned 11 letters in his four years. In Soccer, Nick was named All 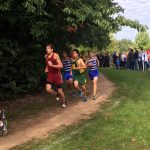 Congratulations to Andrew Holten for making the News Herald Cross Country Team. Andrew Holten, Richard Holten was 18th at the N-H meet in 17:42.10. The junior was 19th at D3 Regionals with a time of 18:16.8. He placed 42nd at the CHSL Championship in 18:48.4 and had three top-three finishes in league meets for Richard.

BOYS Winning the Division 3 Boys Meet was Plymouth Christian with 509 points, 2nd place was Cabrini with 674, 3rd place was Gabriel Richard with 678.  Leading the way for GR was Andrew Holten with a time of 17:45, Nick Hammond at 18:32, Adam Holten at 19:36 – tied with Adam was Sean Clancy – Joshua Tynan at 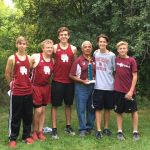 Boys took second (2), missed 1st place by one point.  All the boys received medals, junior Andrew Holten was the top finisher in 22 with 18:00 flat. Girls placed fourth (4). Top finisher was Sophomore, Catherine Cole. She finished in 20 place but all girls received medals.

BOYS On another rainy Saturday, The Gabriel Richard team traveled to the Holly Invitational in Davisburg. In the Varsity Boys Division 4 race Hanover-Horton came in first with 30 points and had 4 boys in the top ten. Whitmore Lake came in second and 3 in the top 25 including the overall 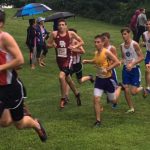 Led by three runners in the top five, Madison Heights Bishop Foley came away as champions of the season’s first CHSL C-D Jamboree, which was held Tuesday at Young Patriots Park in Riverview. The Ventures finished with 47 points, ahead of second-place Marine City Cardinal Mooney (65) and third-place Royal Oak Shrine (71), along with